Thomas Made up Characters and Episodes Wiki
Register
Don't have an account?
Sign In
Advertisement
in: Characters, North Western Railway, Sodor Adventures,
and 6 more

Whiff is a grubby tank engine who works with Scruff at the Waste Dump.

When Whiff first came to the railway, Emily was asked to help him out. Emily was under the impression that he would be more intriguing and that the task would be more exciting; Emily was eager at first, but disappointed when she learned that Whiff worked with rubbish. Emily tried to avoid being seen with him, but Whiff found her almost everywhere she went. Although the two were mocked by other engines wherever they went, Whiff maintained a cheery expression and seemed either not to notice or care. When Emily finally escaped from Whiff, she saw Spencer blocked by a long line of trucks full of rubbish. When none of the other engines helped, she saw Whiff. Emily apologised to Whiff, and together they cleared Spencer's line.

Whiff was present at the celebration of Sodor Day at the newly reopened Great Waterton station.

He later gained his own rubbish dump and with help from Percy, he unblocked the tunnel to Misty Island and saved Thomas, Bash, Dash, and Ferdinand.

Whiff now runs his dump with help from Scruff. One day, when Scruff's "scruncher" was broken, Whiff stayed with him at the Sodor Steamworks until he was mended. This left the rubbish dump without anyone to run it, so Gordon was put in charge for the day.

Whiff requires help from time to time with his rubbish trains. Once, Thomas was supposed to help Whiff with his train, but only succeeded in crashing into the trucks at Wellsworth as Thomas was trying to stay clean for the Duchess of Boxford. In the end, Whiff took the Duchess whilst Thomas cleared up the mess and took the rubbish train. Later on, Whiff tried to be as grand as Spencer by hauling heavy loads. He helped Emily and Edward by taking some of their loads, but only neglected his own job of clearing the railway of the rubbish trucks. After delivering the respective loads, Whiff carried out his work and proved once again to be really useful.

Whiff is based on a LNER X1 tank engine.

Whiff is cheerful and optimistic. He enjoys his job of collecting rubbish. He doesn't seem to care what the other engines think about him: either that or he is oblivious to their opinions. Despite that, he is friendly and always does his job well. He is somewhat naive, as he didn't realise why the other engines tried to avoid him so much.

Whiff is painted in a dark green livery with black and gold stripes and green wheels. He wears large spectacles on his smokebox. 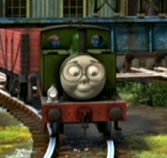