Thomas Made up Characters and Episodes Wiki
Register
Don't have an account?
Sign In
Advertisement
in: Users, Site administration

Hullo there, I am MainLineEngines, proud founder of this wiki. If you need me contact me here, the TTTE Wikia, or ZEM's Forums if privated. I also the creator of Adventures on Rails. I can write an episode for your series if you want and if you need help with your series, don't hesitate to contact me.

You can find my Thomas & Friends history on the TTTE Wikia

But, it all started in 2010, in August... I suppose, I discovered this when my cousin clicked the link to the TTTE Wikia, I learned alot there, and I started to want my own wikia, so I created this and now here I am! I thank Mays, Rawrlego, and Thomas Sir Handel for joining my wiki and helping expanding it. Couldn't have done it without you guys.

Here are all the engines I have made

"Foward! That's the motto on the Great Central Railway"

He is currently in NWR black with red and blue lining and carries his GCR number 177 on his cab and GCR coat of arms and lettering. He was also painted unlined black under the LNER and BR and also carried the numbers 5177 and 64354 respectively.

David has a good sense of humour. He gives great advice, so many engines look up to him. As years have passed, he has grown older and wiser. He is helpful and sympathetic, and has great respect from trucks.

David was built at Gorton and entered service November 1903. He was primarily based at Leicester prior to World War II. He was originally built with slide valves and a saturated boiler and numbered 177 under the Great Central Railway. At Grouping in 1923, his number was prefixed with 5000, becoming LNER No. 5177. He was still based at Leicester and began to enjoy the city for its art and local football team, Leicester City which he remembers fondly and still follows. His first Driver's name was 'David' and growing fond of his Driver's name, inherited it as did many other members of his class although none were officially recognised by the GCR or LNER. During World War II, David's knowledge and skill with trucks was put to good use as he helped to transport gunpowder wagons and other dangerous materials. It was during the War that he was eventually given piston valves, super-heated boiler, brought down to thirteen feet and given a four-thousand gallon tender. He still retains these modifications. This was the J11/3 sub-class. At Nationalisation, he was re-numbered to 64354 and allocated to Annesley where he worked for several years. In 1957, withdrawals of slide-valve J11s started as David was moved to Colwick. During this time, he often assumed stopping trains as well as goods trains and proved very reliable on both, putting in good times. Diesel Rail-cars eventually began to take over passengers services but J11s were still reliable with goods. During 1958 and 1959, David was allocated to Tuxford, Langwith Junction and Staveley before moving to Retford in 1960 where he would finish his career on British Railways. His arrival to Retford proved uneasy. First with the news of the final steam locomotive built and the following year, withdrawal of piston-valve J11s started. By late September 1962, David was the last of his class but still proving as reliable as ever whether it be goods or passenger services. On 21 October 1962, he was withdrawn and set to be cut up at Gorton. Some of his brothers and sisters had long been scrapped but David survived into 1963. Eventually, when it seemed he would really meet the cutter's torch, he saved by the Fat Controller for work on his Railway. David was restored at the Works and re-entered service in late 1963 for work mainly on Edward's line but also works main line goods. Since then, he has proved very reliable and has made good friends with Dodger and Molly. He often offers his experience with trucks to other engines. He usually resides at Tidmouth, but is also to be found at Wellsworth, Brendam or Vicarstown.

And don't forget to read his story right here - David's Biography (still available but now non-canon; Real Engines will explain his pre-Sodor life, so read the short instead!)

If you ever need help or want feedback on your stories, feel free to leave a message and I'll attend to your requests whenever I can. Do keep in mind I have an outside schedule but I'll always find time one way or another. You can also arrange to meet me in the chat, though take notice I am in the west coast on the United States so that's nine hours difference from Western Europe, eight from the UK, three from the US east coast. In addition, I have a copy of Sodor: Reading Between the Lines so if there's any information that you need, I can most certainly look it up for you. 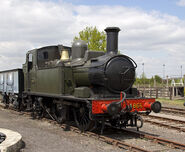 Other Places to find me

Ranked #1
on this wiki