When I first began doing these stand-alone episodes back in March, I did not expect for it to reach twenty-six. But it has and it has been a lot of fun. I don't know where story ideas sometimes come from but they can come from anywhere even a casual conversation with family or friends has inspired some stories.

With that, this is the final story for this year. Rest assured, I have plenty more to come next year. Expect at least two in January. For now, enjoy this episode which combines elements from several Winter episodes and I think nicely closes out the year. So, I hope everyone is enjoying Christmas and the holidays and I wish everyone a Happy New Year.

One morning, the engines at Ffarquhar woke to find several inches of snow on the ground.

"Well, you know what that means," chuckled Jessie.

"Why don't you have Thomas tell us," put in Percy.

"Why waste time saying something we all know?" asked Thomas.

"It's a good reminder," replied Percy.

"You both know and I know and they know, so I'm not going to say it."

The engines never let Thomas forget the time he damaged his snowplough, went without it, and got stuck in the snow and had to be rescued by Terence.

"I'm tired of being reminded of that," complained Thomas at the platform to Liza.

"Well it is important to be safe when there's snow."

Soon it was time for Thomas to go.

At the next station, Terence was there.

"Well I'm wearing my snowplough so I won't get stuck today."

"I promise that's the last thing I want to do."

Then the Guard's whistle blew.

Thomas was soon at the Junction, waiting for Emily but first, Pip and Emma roared by with the Express.

"It looks like the Main Line is all clear," observed Thomas.

Emily arrived with her coaches.

"Did you have a nice journey?"

"It was all right. Nearly all the branch was covered with snow. Fortunately it was downhill. How is the Line clear of snow?"

"Donald and Douglas woke up early and set out to clear the line. They were out even before the Flying Kipper."

"You are lucky. No one clears the snow better than the Caledonian Twins."

"You're good at that too," reminded Emily.

"But still no where near as good as them."

"Do we have to go to the Big Station?" asked Thomas.

Today, Thomas was taking his train to the Big Station.

"It had to be today," thought Thomas.

He was soon at the Big Station, and once all the passengers disembarked, took Annie and Clarabel into the Yard. Then, he puffed into the sheds where the other engines were resting and getting ready.

"And what brings you here?" asked Gordon.

"It wouldn't be because of your snowplough," put in Henry.

"Of course not. I just wanted a spin on the turntable. So I left my train at the Junction and came down here," replied Thomas sarcastically.

"Heh, he has his snowplough."

"Yes I do because I'm not an idiot and I always take care when there is snow."

"Good for you then," said Gordon.

"Nice Christmas tree by the way."

"Ours is arriving tomorrow," finished Thomas. "Anyways, I'm off. See you guys around."

"Don't be late at the Junction!" called Henry.

"I think you should say that to yourself," replied Thomas.

Thomas went to collect Annie and Clarabel again. He went into the Yard and prepared to stop in order to change lines. But Thomas's wheels slipped on the icy rails.

Thomas was not going very fast, but he reached the end of the siding and crashed into the buffers! The buffers stopped him, but his snowplough wasn't in very good shape. His Driver and Fireman inspected the snowplough.

"It's pretty much wrecked," concluded the Fireman.

"Of course not," replied the Driver. "There's bound to be a spare snowplough at Ffarquhar."

They telephoned Ffarquhar and found that there wasn't. Thomas's crew decided to speak to the Stationmaster.

"Well, Jessie will be here any minute. If there's no snow, then you can proceed safely."

"Hey Thomas, what happened with your snowplough?"

"It was an accident."

"Well I hope you can find a spare one or else you might be stuck in the shed."

"I'd rather have that uncomfortable, awkward 'plough than be cold and lonely in the shed," he thought.

"Well I was doing fine until the demise of my snowplough."

"Ye dinna say. What happened to the snowplough?"

"I slipped on the rails and crashed straight into the buffers."

"Och, never mind. If ye can't find any wurrk, ye can help me clear snow on the Main Line!"

"Or me. I do it better than Douggie."

The Twins laughed and Thomas had to chuckle as well.

"Maybe there will be something else for me to do whilst I get a new snowplough."

"There's bound to be," replied Douglas. "Now, we have to head up to Arlesburgh."

The Twins set off as passengers began to arrive.

"I know you're going to ask about my snowplough."

"Rubbish! I was going to tell you that two coaches had to be added to my train."

"About your snowplough too."

"Well, it was an accident, but for the meantime, I'm sure I can go without out. At least just this journey."

Once the passengers were on board, Thomas and Henry steamed out of the station.

Thomas was running well. The line was clear and he just had to take caution because the rails were icy.

He was soon at the station by the river, were he took on water.

"So far no mishaps," he thought happily.

"Hey Thomas," called Liza, "we heard about your snowplough."

"You have? How does stuff like that spread so fast?"

"Well there's a lot of devices that let you know the latest news very quickly. But anyways," continued Liza, "there is a spare snowplough coming in a couple hours. Percy will bring it along with the coal."

A little later, Percy was at the Junction waiting for Molly.

"Not long now," he thought.

"I see you brought the snowplough."

"It does look a bit older than Thomas's other one."

"It is all they had at the Works."

"It'll do for the meantime."

So, by that afternoon, Thomas had his snowplough.

The next day, Thomas was sent to help Toby. He puffed into the Junction and saw a magnificent Christmas tree on a flat-truck.

"Yes," smiled Toby. "Thanks for coming. I can't clear the lines by myself. I also have a lot of food for the town. Many roads are still blocked but you've got your snowplough now, so we won't get stuck."

Thomas was coupled on in front and Toby was right behind the brake van. The Guard's whistle blew and they were off.

They made good time to the station by the river. No snow had fallen and although the rails were a bit icy, they took caution.

But as they approached the tunnel, some snow appeared. Thomas sliced through it easily but he couldn't see that a rock had fallen onto the line. Thomas hit the rock and his snowplough came off!

The two engines puffed to a halt. The Guard alerted the Signalman that the line was blocked whilst Thomas's Driver inspected him.

"Luckily it's only the snowplough that was damaged," concluded the Driver.

"Worse still, there's several inches of snow up ahead," added the Fireman.

"Now we won't get the Christmas tree to Ffarquhar," he thought to himself. "I wish I could cut through the snow myself."

"But we'd just get stuck," reminded the Fireman.

"Well, if we're careful, perhaps not."

"If the snow isn't that thick, I can push it aside," explained Thomas. "We can also use my fire to melt some of the snow."

The Driver and Fireman were a bit unsure but decided to give it a try.

At Ffarquhar, many people were waiting. So was Percy.

"We ran into a bit of trouble," said Thomas.

Thomas told him what had happened.

"Still, we're glad you made it," said the crowd, "the shop was running low on food."

Even Toby and Percy whistled for him.

Thomas was very pleased but he was still a little bit worried. He had broken his snowplough again.

Thomas puffed into his shed.

"You do deserve some rest," comforted the Driver.

The Driver and Fireman walked away.

"I'll go to sleep," thought Thomas. "That might help."

He fell asleep and soon it was nighttime and he was awake as Toby, Percy and Mavis returned.

Thomas didn't really feel like talking so he simply closed his eyes. The others talked a great deal but no-one mentioned snowploughs. The following day, there was snow on the rails in the morning, so Percy took Annie and Clarabel. Toby and Mavis set off as well and Thomas was left alone.

"I wonder how long I'll have to wait to come out."

Just then, Liza walked up and clambered into Thomas's cab and began making the fire.

"What are you doing?"

"Starting your fire of course."

"So you can go out and be Really Useful as you like to."

"I mean, I wrecked my snowplough. Surely, I shouldn't be allowed."

"So what does that mean?"

"That you'll be fine without your snowplough."

"Yeah. If you're careful, you won't get stuck."

"No problem. And I'll even give you a good polish."

Soon Thomas's fire was roaring and he was well polished.

Liza smiled then headed towards the station as Thomas's Driver and Fireman arrived.

"Ready to be Really Useful," remarked the Driver.

"Yes I am," replied Thomas, and with a toot of his whistle, Thomas the Tank Engine steamed off to work. 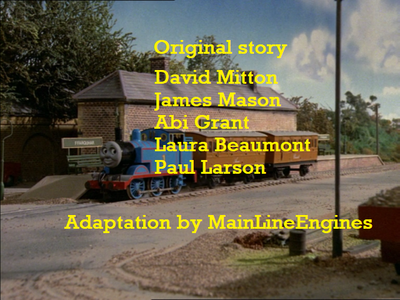 Retrieved from "https://thomasmadeupcharactersandepisodes.fandom.com/wiki/Thomas%27s_Snowplough?oldid=31452"
Community content is available under CC-BY-SA unless otherwise noted.