Thomas Made up Characters and Episodes Wiki
Register
Don't have an account?
Sign In
Advertisement
in: North Western Railway, The Motorized Railway, Characters,
and 14 more

Thomas is a tank engine who works on the Knapford-Ffarquhar Branch Line on the North Western Railway.

In Adventures on Rails, he was built throughout 1913 and completed on January 1914 at Brighton Works. He worked at Southampton Docks for about a year before being bought by the Fat Controller in May 1915 to help on the newly formed North Western Railway on the Island of Sodor.

He worked as a station pilot at Vicarstown until 1923 when he rescued James after a nasty accident, and was then given his own branch line, and two coaches whom he named Annie and Clarabel. He has had a number of strange incidents such as, needing to get water from a river but resulting to have fish in them, leaving his Guard behind after he tripped on an old lady's umbrella, crashing into a stationmaster's house whilst they were having breakfast, and getting into trouble with a policeman on the Quarry Tramroad for not having cowcatchers and side-plates. Despite this, he has proven on a number of occasions he is still very useful, such as stopping some theives who robbed the Ffarquhar stationmaster, being the representative of the North Western Railway at the National Railway Museum, and rescuing a swan stranded on the line.

He keeps busy on his branch line where he runs the passenger operations with Daisy and his two coaches, Annie and Clarabel.

Thomas is rather cheeky, but is good at heart and generally behaves well, except when he is getting into mishap. He loves teasing the others and, on occasion, brags about his superiority, but is always brought down to earth in due course. If Thomas has one major character flaw, it is that he is forgetful, and slightly impatient. However, he is also optimistic and idealistic.

Thomas is based off the LB&SCR E2 with extended side tanks.

Thomas is painted NWR blue with red lining and a yellow '1' on his tanks with a red border.

In Adventures on Rails, prior to arriving on Sodor, he was painted LB&SCR black and the number 104 on his cab and "LB&SCR" on his tanks.

Thomas is a major antagonist.

More Episodes to be confrmed

Thomas with Annie and Clarabel 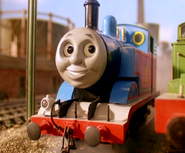 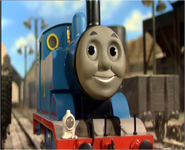 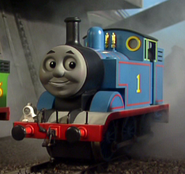 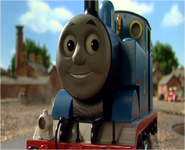 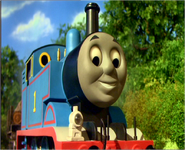 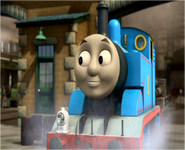 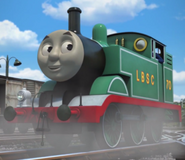 Thomas in his original livery

Thomas in his "streamlining" livery