Thomas Made up Characters and Episodes Wiki
Register
Don't have an account?
Sign In
Advertisement
in: Characters, Adventures on Rails, Sodor Adventures,
and 6 more

Stepney is a tank engine from the Bluebell Railway.

He came to visit Sodor for a while in 1964, where he made good friends with Duck. Percy first heard about him and told Douglas and they welcomed him warmly. He worked on Thomas' Branch Line, where a cricket ball was accidently hit onto one of his trucks and the men had to chase him down the line on Caroline. On his last day, he helped Duck take the Express after D261 failed.

Stepney is based on the real engine of the same name, an LB&SCR A1x Class "Terrier" 0-6-0T tank locomotive.

Stepney was painted in the ochre locomotive livery of the LB&SCR, formally known as "Stroudley's Improved Engine Green".

Stepney is a bubbly, honest, and humble chap who is busting with enthusiasm. He is very eager to please and is every engine's friend. Even if an engine might not like him at first, his personality wins them over. After being saved from scrap by Rusty and the Bluebell Railway, he now runs his own branch line, but loves helping out on the Fat Controller's Railway. He has an enthusiasm for learning and listening to advice, as well as keeping busy. Stepney can feel down in the dumps if he does not get enough work to do or if he does not get a good long run to stretch his wheels. Stepney is high-spirited, lively, and is keen to see fair play. He is popular amongst the engines and is always game for more work. 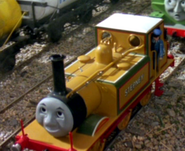