Thomas Made up Characters and Episodes Wiki
Register
Don't have an account?
Sign In
Advertisement
in: Characters, The Many Adventures on the Island of Sodor, Sodor Adventures,
and 7 more

Stephen was brought to Sodor to be restored by Sir Robert Norramby. He was eager to get to work, but that lead him to be trapped in a mine. He was ultimately rescued by Thomas, and also found King Godred's lost crown in the mine. He now enjoys taking passengers around Ulfstead Castle.

Stephen is a jolly old engine with a positive attitude and a good sense of humor. He is a good-hearted and quick-witted engine, and will not take any nonsense from engines like Spencer or Diesel. Some of the smaller engines look up to him for advice, and he is always willing to get the job done.

Stephen is painted yellow and black. He bears a gold nameplate reading "Rocket". His funnel is painted white with a gold finial and his domes, whistle, exhaust pipes, and boiler bands are copper.

Stephen is an antagonist. He inhabits Ulfstead Castle at Night. He will attack players by biting them.

He is a yellow humanoid with sharp claws and teeth, black eyes with red pupils, and his funnel on his head. His bottom half is missing, exposing part of his spine and forcing him to crawl. 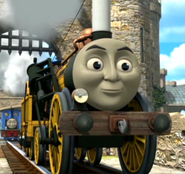 Stephen with Glynn and Gordon

Stephen in All Engines Go!
Community content is available under CC-BY-SA unless otherwise noted.
Advertisement