Thomas Made up Characters and Episodes Wiki
Register
Don't have an account?
Sign In
Advertisement
in: Characters, North Western Railway, Adventures on Rails,
and 6 more

Stanley is a silver engine who works at Great Waterton.

Stanley was brought to the Island to help out with Thomas' jobs whilst he was working at Great Waterton. Thomas didn't like him at first for "stealing" everything, but eventually they became friends when Stanley found Thomas after he'd been lost in Morgan's Mine.

Stanley is a Hudswell Clarke/Kitson No. 5459 "Austin I" hybrid.

Stanley is the "boy-next-door" of the Fat Controller's Railway. Cool and cheery, there is nothing Stanley would not do for another engine. And if he could not do it, he would find someone who could. He is sleek, smart, and stylish and his silver and light grey appearance, with striking red wheels and a shining smokebox certainly makes him look the part as he eagerly goes about his work.

Stanley is painted silver all over with red wheels and lining. He has a red running plate with a dark grey basecoat, and his name on each side of his saddletank. 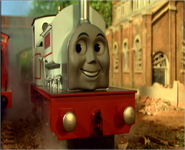 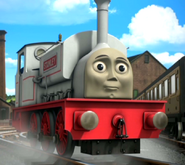 Stanley with Edward and Norman