Thomas Made up Characters and Episodes Wiki
Register
Don't have an account?
Sign In
Advertisement
in: North Western Railway, Characters, Adventures on Rails,
and 15 more

Spencer is a fast silver steam engine from the Mainland owned by the Duke and Duchess of Boxford.

Spencer came from the Mainland owned by the Duke and Duchess of Boxford. He boasted to Gordon about being the fastest engine in the world, but stopped boasting after he didn't listen to Gordon's advice to take on water and got stuck on the hill, and needed to be rescued by Gordon. He later came back and raced Edward, but lost after he fell asleep whilst the Duke and Duchess were taking photos, allowing Edward to overtake him and win the race.

Spencer is based on off the LNER A4. Mallard is another type of this class.

He is painted grey with black lining.

Spencer is the main antagonist, being the one behind the mutation of the other engines. He did this because he thinks Engines complain too much.

In Collection Mode, he inhabits Vicarstown Station with Diesel. 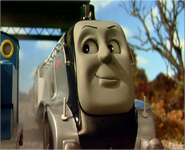 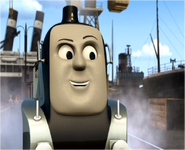