Thomas Made up Characters and Episodes Wiki
Register
Don't have an account?
Sign In
Advertisement
in: Characters, Skarloey Railway, Adventures on Rails,
and 9 more

Falcon was built at Falcon Works in Loughborough, England for the Mid Sodor Railway as an 0-4-0ST, causing him to bounce until he was rebuilt with a rear pony truck.

When the Mid Sodor Railway closed in 1947, he and Stuart were sold to the aluminum works at Peel Godred for an expansion project. They were sheeted at the project's close for almost a year, then both were purchased for a total of fifty pounds by the Skarloey Railway and renamed Sir Handel and Peter Sam respectively.

Sir Handel did not cope well with the worn track on the railway and would often derail - sometimes deliberately. He was given a pair of special wheels with broad tyres to cure this problem, dubbed "steamroller wheels" by the other engines.

In 1983, Sir Handel visited the Talyllyn Railway to help while Talyllyn was being mended. Sir Handel had plenty of adventures there, like pulling a wedding train and having to wear an eye-patch after colliding with a tree at Nant Gwernol.

When Peter Sam was brought back from the Talyllyn Railway early during a visit in 1995 Sir Handel became jealous and as a protest deliberately knocked out his firebars. He was sent to the shed and began to fear that he would never come out after weeks went by and no one came to see him. When The Thin Controller came in one day Sir Handel confessed and asked for a second chance. Sir Handel got his firebars later that day - no one bothered to tell him that they had only just arrived.

He is presently on loan to the Talyllyn Railway.

Sir Handel, named Falcon is his younger days while being brought up under the instruction of Duke, has been prone to moody tantrums, being stubborn and thinking that he knows better than others. He has broad wheels which hold well to the rails and has been said to give a smooth ride, perhaps contributing to his arrogant self-importance and his belief that he is a grand engine. He has been known in the past to take a disliking to the narrow gauge coaches (often referring to them as "cattle trucks"), feign illness, and think that he should be in charge. However, Sir Handel works to get things done and is proud to also be a reliable, helpful, and good-hearted engine. He has a habit of getting too big for his wheels.

He is painted blue with red and yellow lining. 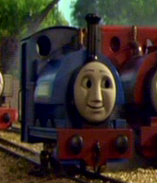 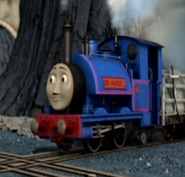