Thomas Made up Characters and Episodes Wiki
Register
Don't have an account?
Sign In
Advertisement
in: Characters, North Western Railway, Diesels,
and 7 more

Salty is a dockside diesel shunter.

Salty worked on an unnamed coastal railway before coming to Sodor. When Salty first arrived on Sodor, he was sent to work at a quarry, but missed the sea. However, he managed to cope with the trucks and fill in a big order for the Fat Controller, and was awarded by being sent to work at Brendam Docks.

Salty speaks in a pirates accent in using the terms "Ahoy!" and "Me hearty!". He is kind to both steam engines and diesel engines.

Salty is painted crimson with pink warning stripes along his body, wasp stripes on his front and rear and yellow buffer beams with signs of rust. At the top of his forehead, he has the brim of a skipper's hat.

The New Adventure on Rails 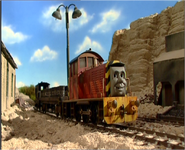 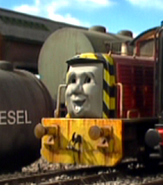 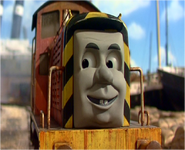 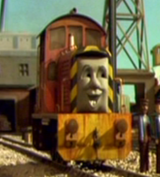 Salty with Paxton and Porter