Thomas Made up Characters and Episodes Wiki
Register
Don't have an account?
Sign In
Advertisement
in: Characters, Skarloey Railway, Diesels,
and 9 more

Rusty is an narrow gauge Diesel.

Rusty was built by Ruston and Hornsby Ltd. in Lincoln, England. He was bought by Sir Handel Brown direct from the builders in 1957 to assist Sir Handel and Peter Sam. While they handled passengers and goods, Rusty was paired with CME Mr. Ivo Hugh to repair the ageing track-bed along the line.

When Sir Handel pretended to be ill, Rusty was asked to assist Peter Sam with the slate trucks and later that day had to perform a rescue operation at the quarry when Peter Sam had an accident on the incline.

Following the return of Skarloey, Rusty was put back on maintenance duties, but had an argument with Duncan about taking care on a "bad bit" of track south of Cros-ny-Cuirn. While initially refusing to help the conceited Duncan when he derailed, Skarloey reminded Rusty of his responsibility towards the passengers and he set out at once, later making up the quarrel with Duncan. Later that year, Rusty and Mr. Hugh were chosen to demonstrate to a television crew how they maintained the line at Quarry Siding.

In 1961, Rusty and Mr. Hugh discovered a washed out section of track south of the tunnel and the railway was closed temporarily while he and the workmen repaired the line. He was later present when Rheneas finally returned home.

In 1964, the Lakeside loop line extension was opened in a grand ceremony at Quarry Siding. Rusty was asked to bring visitors to celebrate the occasion.

In 1984, Rusty was in charge of carrying away tree branches and other cuttings, which were being trimmed from the line so that passengers could get a better view.

In 1995, Rusty was put in charge of the weedkiller train, a job he disliked because it required slow speeds. The weedkiller later created trouble with Rheneas, who couldn't get a firm grip on the wet, greasy rails. He later had to take Sir Handel's trains after Sir Handel had caused his fire-bars to collapse. Rusty was present during No. 7's naming ceremony, and showed great delight upon learning that his co-worker, Mr. Hugh, was chosen as the engine's name.

Rusty is a trusty, tame, friendly little Diesel. He is a dedicated worker, often maintaining the line, while understanding and respecting the importance of his duties. He also has a rather distinctive two-tone horn. Rusty is quick to remind others with regards to proper conduct, particularly Duncan, who was initially very suspicious of the little Diesel. He has a good working relationship with both Skarloey and Peter Sam in particular. Caring, calm, and quick-thinking, Rusty is modestly a credit to the Skarloey Railway.

He is painted orange with yellow lining and white lettering. 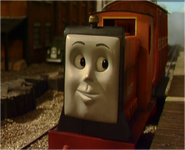 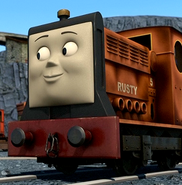