Thomas Made up Characters and Episodes Wiki
Register
Don't have an account?
Sign In
Advertisement
in: Characters, Skarloey Railway, Adventures on Rails,
and 8 more

Rheneas was built by Fletcher, Jennings, and Co. at Whitehaven and arrived on the Skarloey Railway sometime around 1866.

Unlike Skarloey, Rheneas was stern and thoughtful and fell out with Skarloey after the latter called him a "stick-in-the-mud" following an argument over cabs. The two reconciled after Rheneas saved Skarloey from a landslide.

Rheneas literally saved the railway by keeping service through a very lean period in the late 1940s. By 1950, Skarloey was in need of repairs, leaving Rheneas to run the line. He managed to pull a full train home one rainy day despite jammed valve gear and was rewarded with an overhaul. His overhaul took place in 1961 and was returned to the Skarloey Railway soon after.

Rheneas has been called a "gallant old engine" before and deserves such a title. Rheneas is highly determined, brave, courageous, and long-time friend of Skarloey. He is a tough, committed worker despite his age and takes great responsibility in his work. He is keen to keep his friends smiling and, although he is a level-headed engine, he can be a bit of an adventurer too. Though he may often try to struggle on alone, Rheneas knows when it is time to call on the help of his friends. Nevertheless, Rheneas is always highly dedicated to the task at hand.

Rheneas is painted vermilion with gold and black lining. 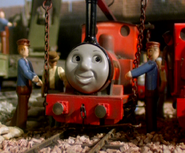 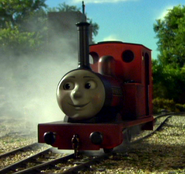 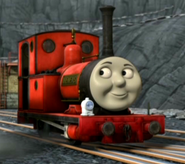