Thomas Made up Characters and Episodes Wiki
Register
Don't have an account?
Sign In
Advertisement
in: Characters, Skarloey Railway, Adventures on Rails,
and 5 more

Stuart was built by Kerr Stuart Works in Stoke-on-Trent, England.

While living on the Mid Sodor Railway, he was cheeky and occasionally made fun of Duke until told what happened to Stanley.

After the line closed down in 1947, he and Falcon were sold to the Sodor Aluminum Company at Peel Godred and worked there until 1951, at which time both engines were sheeted for a year until they were purchased by the Skarloey Railway in 1951.

Upon arriving, Stuart - renamed Peter Sam - had many adventures. One of his more notable story arcs involved his funnel, which was severely damaged after an accident at the incline. The funnel was eventually knocked-off as he passed under a tunnel and it was temporarily replaced with a rusty pipe. Peter Sam was soon given a new funnel, a Giesl ejector, which suits him much better.

Peter Sam, named Stuart in his younger days while being brought up under the instruction of Duke, is highly enthusiastic, eager, and bubbly. He can be occasionally cheeky, teasing, and a little cocky, but is kind-hearted, well-meaning, and good mannered. He can also be prone to being a little naïve at times and perhaps take things a little too literally. Peter Sam has a special funnel which makes puffing much easier, after his old one was damaged in a nasty accident with some trucks that broke free from the incline. With an infectious attitude and high spirits, Peter Sam is almost kind and hard-working to a fault, seldom grumbling about late hours or extra work. He is always nice to the coaches and even the trucks.

Peter Sam is painted green with red and yellow lining. 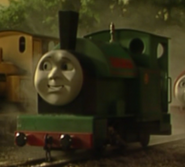 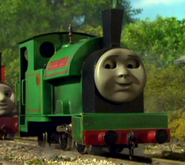 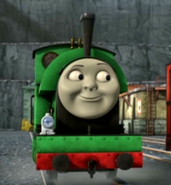 Peter Sam with Skarloey
Community content is available under CC-BY-SA unless otherwise noted.