Thomas Made up Characters and Episodes Wiki
Register
Don't have an account?
Sign In
Advertisement
in: North Western Railway, OO Railway, The Motorized Railway,
and 14 more

Percy is a Great Western Avonside saddle tank engine who works on the Ffarquhar Branch Line.

Percy was built by the Avonside Engine Company on the Great Western Railway. He was brought to Sodor to help out with shunting after Gordon, Henry and James went on strike. He worked Thomas's Branch during that period, and soon became very close friends with Thomas. Afterwards, he worked as station pilot at Tidmouth until 1955 when Duck arrived and Percy went to work on the building of Knapford Harbour. He also had his infamous race with Harold the Helicopter and helped get some children home during bad weather. He still works on Thomas' Branch, usually handling the goods trains on the line with The Truck, but also does maintenance work around Sodor, and occasionally gets jobs on the Main Line. He also seems to carry on a rivalry with James.

Percy is painted in NWR green with red lining and the number '6' on his cab with a red border and builder's plates.

He is a cheeky little engine with no desire for adventure in the big world outside. He is always keen to oblige, a fact of which the other engines are apt to take advantage.

Thomas And The Engines

He will appear in more episodes. 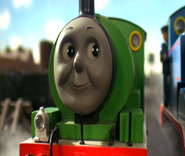 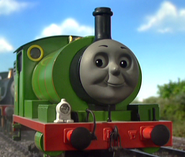