Thomas Made up Characters and Episodes Wiki
Register
Don't have an account?
Sign In
Advertisement
in: North Western Railway, Reformed Villians, Diesels,
and 7 more

Paxton, nicknamed "Pax", is a young, dark green diesel engine. He often brings slate down from the Blue Mountain Quarry to other parts of the Island.

In Adventures on Rails he was built in 1962, amongst the last of his class, and bought by the National Railway Museum for both display and service. After being recently restored he was brought on trial to the North Western Railway in 1969. He tried to show Norman that steam engines weren't all rude after James was rude to them, but it wasn't until he worked with Thomas that Norman understood. A while later, he was transferred to the Blue Mountain Quarry.

Paxton is a young, gentle diesel who often works in or around the Blue Mountain Quarry and the Vicarstown Dieselworks. He is good-hearted and well meaning, but gullible, naïve, and easily misled. He also has a short attention span. He tends to be more of a follower than a leader and can sometimes find thinking for himself and making big decisions difficult. This may result in him being pressured into a situation he might not necessarily be comfortable with. However, if a friend is in trouble, Paxton will have the conscience and the self-assertion to do what he himself feels is right. As a result, the other steam engines find that he is likeable and Paxton particularly looks up to Thomas at times. He also works alongside the narrow gauge engines frequently. However, Paxton can easily misjudge situations, misplace his trust in someone who might not have everyone's best interests at heart, and is a rather impressionable diesel, but his good nature will ultimately show him for who really wants to be.

In Adventures on Rails, he is painted NWR dark green with a lime stripe, D8 (a reference to his class) on his cab in yellow, and SR in the centre. 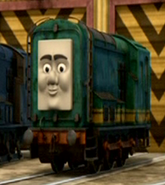 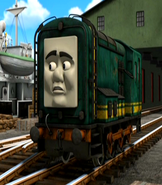 Paxton with Salty and Porter

Paxton with Oliver
Community content is available under CC-BY-SA unless otherwise noted.
Advertisement