Thomas Made up Characters and Episodes Wiki
Register
Don't have an account?
Sign In
Advertisement
in: North Western Railway, OO Railway, The Motorized Railway,
and 14 more

James is a medium sized mixed-traffic engine who works on the North Western Railway.

James was built around 1912/13 for mixed-traffic work as a 0-6-0 with a three-chime steam whistle. Prior to his arrival on Sodor in 1923, he was given a pony truck making him a 2-6-0 instead of his original 0-6-0 configuration and a regular steam whistle. On his first day, his trucks and his old wooden brakes caused him to derail. After that, he was given red paint and proper brakes. However, he caused trouble for the Fat Controller when he sprayed his shiny new hat. He was threatened to be repainted blue, and became very cross, and bumped the coaches so hard, he caused a hole in one of them, which needed to be repaired by a bootlace! After that, he came much more sensible, and redeemed himself when he took a line of troublesome trucks by himself, and the Express, after Gordon got sent down the wrong line by "instincts". James is usually kept busy pulling trucks and coaches on the Main Line. He also seems to carry on a rivalry with Percy, which is seen a lot of the times they are together.

James is based on a Lancashire and Yorkshire Railway Class 28.

In Adventures on Rails, James is painted NWR red with blue and gold lining. He has a yellow '5' with a black border on his tender. His blue lining was previously black before 1959. Before coming to Sodor he was painted black with red lining.

He will appear in More Episodes

James in his original black livery

James in the Railway Series 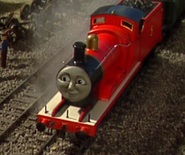 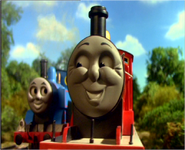 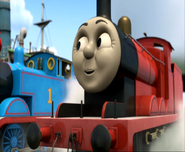 James in a pink undercoat

James in his original black livery

James and Emily in their "Best Decorated Engine" liveries