Thomas Made up Characters and Episodes Wiki
Register
Don't have an account?
Sign In
Advertisement
in: Characters, Cranes, North Western Railway,
and 7 more

Harvey is a crane engine.

When Harvey first came to the railway, the engines thought he looked strange with his crane hook, and doubted he could be Really Useful. However, after he helped Percy from a nasty accident on Bulgy's Bridge, the engines have respect him since. He is usually found on construction sites on Sodor, and helps out whenever there's an accident.

With perhaps the most distinctive appearance of any engine, Harvey is painted burgundy with yellow lining and brown square buffers. His name is written in yellow on his side. His number, 27, is written on both sides of his crane arm in yellow.

Harvey is a relentlessly cheery, big-hearted, helpful crane engine. He has a very unusual shape, due to his crane attachment atop his boiler, which he can be sensitive about should other engines make fun of it. However, he is very able to show that his crane is very useful in lifting cargo, trucks, and sometimes some smaller engines.

He has a booming, thoughtful voice and large wooden buffers. He is happy to work anywhere, ready to help clear up after an accident, and offer words of care, comfort, and advice. 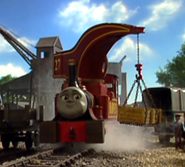 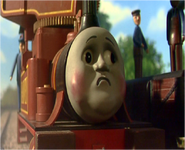 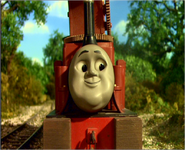 Harvey with Duck, Oliver, and Skiff

Harvey with Annie
Community content is available under CC-BY-SA unless otherwise noted.
Advertisement