Gordon Takes a Tumble is the sixth episode of the fourteenth season.

Tidmouth Harbour is a very busy port on the North Western Railway. Every day ships bring in passengers and goods for the engines to take to various places. Of course, there is a lot of cargo exported as well, such as coal, milk, stone and china clay.

Norman is station pilot at Tidmouth but he sometimes help out at the Harbour along with Donald and Douglas. It was getting so busy that the Fat Controller decided to bring in Salty from Brendam Docks to help out.

"Arrgh, a nice change of scenery but still by the sea!" he said gleefully.

Salty soon sorted their trains then rolled over to the Yard where he saw Gordon resting.

"Hullo me-harty. Waitin' for your next job?"

Then Percy trundled in.

"Hullo Salty. Looking after the Harbour?"

"A load of timber is arriving."

"Ah yes. We'll be unloading together."

So the two engines headed over to the Harbour. Percy came back with several flat-trucks piled with timber.

"You know. With your speed, perhaps you'd be good at pulling trucks."

"My speed is for pulling the Express, not trucks. It just wouldn't be dignified."

"Of course not," replied Gordon crossly.

"Dignified, huh? Meaning getting too big for your buffers," added Salty.

"Pah!" snorted Gordon. "It'd take a miracle for be to pull trucks. But when it does, I'll show you a thing or two."

That evening, fog began to roll in. Work slowed down to cope with the hazardous conditions.

"Got your head-lamps, James?" asked Norman.

"Of course! I can barely see a metre through this fog," replied the Class 28.

At the Harbour, several ships were delayed.

David was waiting impatiently for his load.

"We're going to have lines of trucks waitin'," observed Salty.

"Well don't expect me to pull everything," replied David. "I do have my limitations."

Salty was right. When the ships finally arrived there were too many trucks for David to handle alone.

The Fat Controller checked the schedule then went over to the Sheds.

Douglas was there and just as the Fat Controller walked in, Gordon puffed in back from pulling the Express.

"Precisely who I was looking for. The fog caused several delays. Now there's extra trucks waiting at the Harbour. David cannot take them all himself so I need both of you to help out."

"Trucks? Not me, Sir," complained Gordon.

"Yes Gordon, you. You're strong so it'll help move out more trucks."

Over at the Harbour, David was finally ready to go.

"Already late, but might as well have a good run," David told Salty.

Then the Guard blew his whistle and showed his green lamp.

Then Douglas and Gordon steamed in.

"You two here to help move the trucks?"

Douglas chuckled. "Of course he is! Wa'd ya think?"

"Must not be so dignified, eh?"

"It isn't. Now hurry up and arrange my train."

"Why the rush?" asked Douglas.

"If I must pull trucks, I'll show Salty how an Express engine handles trucks."

"All set!" called Salty. "Remember: don't get too big for your buffers!"

Gordon snorted and started as soon as the Guard blew his whistle.

"Hey! Easy!" called the trucks. "First you can't see a thing and now you've got engines bumping you," they complained.

Gordon just got grumpier as the journey progressed. Soon, they reached Edward's Station.

The Fireman shovelled in more coal and the fire burnt brightly.

"This is how you handle trucks," groaned Gordon as he forged up the Hill.

Finally, the top approached. Gordon felt so confident that he forgot to be careful. Before he knew it, the trucks bashed their buffers.

"No!" cried Gordon and put on the brakes but it was too late! The train gathered speed down the hill and rushed past Maron.

The Signalman saw what had happened and the set the points to a siding up ahead.

About a quarter-mile ahead, Gordon was switched off the Main and into a siding above a cutting.

Gordon's Driver and Fireman jumped clear as the big engine crashed through the buffers, de-railed and tumbled into the cutting.

The Driver, Fireman and Guard went back for help and soon Edward arrived with the Breakdown Train. And the Fat Controller.

"Well Gordon. You wanted to show Salty a thing or two and you've certainly done that. You've shown him the careless way to handle trucks."

Gordon was taken to the Works. He returned several weeks later.

He stopped at Wellsworth pulling a stopping train and saw Edward waiting.

"Hullo Gordon," called Edward. "Nice to see you out again. Definitely missed you on the Express."

"Well, you don't pull trucks very often but you were determined to do the job despite it not being your favourite job."

"Just got to big for my buffers, like Salty said."

"Salty said he was sorry for teasing you."

"I'm sorry too. I shouldn't have gotten cross."

"After all, you know Salty has always been friendly to us steam engines."

"Well, cheer up now. You'll be back to your usual work and you've learnt your lesson now."

Presently, Henry came rushing through with the Express.

Then the Guard's blew whistle and Gordon whistled loudly feeling much better.

All the engines are proud of how useful they are, but none feels more important than Gordon.

"Watch out! You'll get my paint all sooty!"

"Pulling trucks is a sooty job, but then you wouldn't know."

"Of course not. Express engines don't pull trucks. It wouldn't be dignified."

"It means getting too big for your buffers," Salty laughed.

Fog came across Sodor that night. The Harbour was packed with waiting trucks.

The Fat Controller came to the Sheds.

"Thomas, Henry, and Percy, I need you to collect some trucks from the Harbour."

Then, he turned his attention to the big blue engine.

"You too, Gordon. I need another big engine to take the trucks where they won't be in the way."

Gordon could not believe what he had heard!

He was not happy to pulling trucks.

"If I must pull trucks, then I'll show Salty how an express engine pulls trucks."

Gordon then slowly steamed away.

Gordon was making good time with his heavy load.

The signalman at the signal box heard Gordon coming.

But Gordon had already disappeared into the distance.

The old Branch was old and wobbly.

Finally, he slid to a stop.

". . .undignified. What will the Fat Controller say?"

He found out next morning.

"You wanted to teach Salty a thing or two about pulling trucks and you've certainly done it. You've shown him how silly it is to ignore 'Go Slow' signs."

Two weeks later, Gordon was fixed and back at work.

But he felt ashamed and embarrased.

"Even me," laughed Gordon.

Then, they whistled, including Gordon! 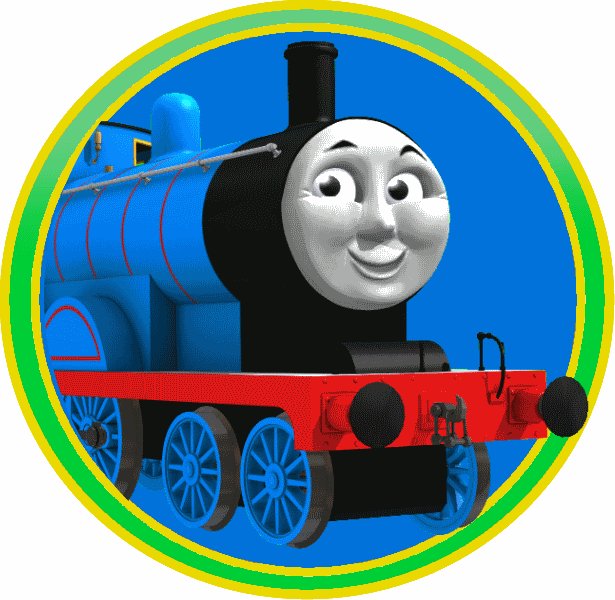