Thomas Made up Characters and Episodes Wiki
Register
Don't have an account?
Sign In
Advertisement
in: Characters, North Western Railway, Sodor Adventures,
and 7 more

Glynn is one of the "Coffee Pot" engines.

Glynn was the original number one engine on the North Western Railway before the arrival of Thomas, the LBSC E2 tank engine. He was last seen on a siding in Ffarquhar, with ivy growing all over his body. Many years later, Thomas rediscovered him which he reveals he was moved from siding to siding, Thomas decides to take the Earl of Sodor to see Glynn who delightfully agrees of having him restored, and now Glynn works with Stephen and Millie up at Ulfstead Castle.

Glynn with Stephen and Gordon 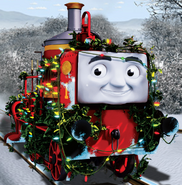 Glynn in All Engines Go!
Community content is available under CC-BY-SA unless otherwise noted.
Advertisement