Thomas Made up Characters and Episodes Wiki
Register
Don't have an account?
Sign In
Advertisement
in: Characters, North Western Railway, Road Vehicles,
and 10 more

Flynn is a fire engine who can on the rails and the roads.

Flynn was brought to Sodor by Belle's recommendation. Thomas quickly made friends with him, making Percy sad. He later fought the fire at the Dieselworks with Belle. Later on, he was trying to find a "blue engine" who's "firebox was on fire" but only ended up humiliating himself in front of Diesel, Norman, and Paxton. However, he managed to put things right.

Flynn is fast, fearless, and ready to fight any fire. He is popular with the engines and held in high regard all over Sodor. He's always there if a fire starts and does his best to put it out. And, at the end of the day, Flynn always has it in him to prove that he is always ready to rescue, and is a really useful hero.

Flynn is an antagonist. He inhabits Harold‘s Airfield with Harold, Bertie, Belle, Splatter, and Dodge.

Flynn on the road with Butch

Flynn and Belle in The Great Race 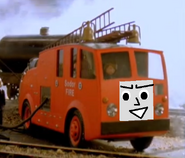 Flynn in The Sodurians
Community content is available under CC-BY-SA unless otherwise noted.
Advertisement