Thomas Made up Characters and Episodes Wiki
Register
Don't have an account?
Sign In
Advertisement
in: North Western Railway, Characters, Adventures on Rails,
and 10 more

Duck worked at Paddington until 1955 when he was brought to Sodor to help with the workload. When Diesel visited the Island, he was made look bad, and sent to Edward's station for a while. However, after an accident, the Fat Controller told him him he could return, and sent Diesel packing. When Diesel returned years later, he was not happy, especially after he caused trouble at the Harbour.

Duck is painted GWR green with red lining and black wheels. He has a plaque with the number 5741 on his cab, and "GWR" printed in yellow on either sides of his tanks. 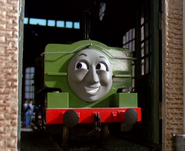 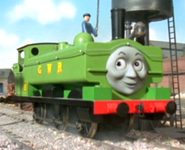 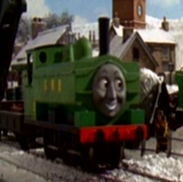 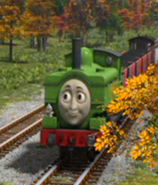 Duck with Donald and Douglas