Thomas Made up Characters and Episodes Wiki
Register
Don't have an account?
Sign In
Advertisement
in: North Western Railway, The Motorized Railway, Characters,
and 11 more

Originally, the Fat Controller sent for only 57646 (Donald) but 57647 (Douglas) was smart knowing he had no chances if he stayed on the Other Railway. They caused a series a mishaps which included misplacing an important coach, crashing into a signal box, and crushing the Spiteful Brake Van. They did however, work well in the snow and rescued Henry who been stuck in a snow drift. The engines made Percy their 'deputation' to convince the Fat Controller to allow Donald and Douglas to stay in fear they would be scrapped if they returned to the Other Railway. The Fat Controller eventually allowed them to stay by offering them a new coat of paint.

They now work on either the Little Western, the Main Line, and occasionally help Edward, David, and BoCo on the Wellsworth-Brendam Branch Line.

They are cheerful, friendly, and helpful. They like jokes too. They do however get the job done in the end and are a valuable asset to the Fat Controller's railway.

They arrived on Sodor with BR's goods black with red lining, and their numbers on their cab side. After they were allowed to stay, they were repainted NWR blue with gold and red lining, as it reminded them of the Caledonian Blue.

The Twins in the Railway Series

Donald and Douglas in CGI 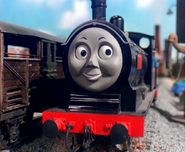 Donald with his twin 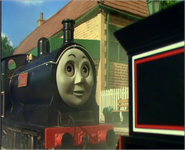 Donald and Douglas with the other engines 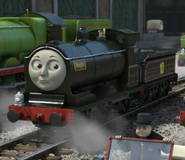 Donald and Douglas with the other engines
Community content is available under CC-BY-SA unless otherwise noted.
Advertisement