Thomas Made up Characters and Episodes Wiki
Register
Don't have an account?
Sign In
Advertisement
in: North Western Railway, Diesels, Characters,
and 7 more

In Creator Collective Remade, Diesel 10 was moved to work at the Dump with Whiff and Scruff and banned from returning to the Dieselworks unless for important reasons like breaking down. Since then, he has had a major change of heart, gladly wanting to help others (including steam engines) and mostly leaving his villainous tendencies behind. However, he can still be annoyed quite easily.

In Creator Collective Remade, Diesel 10 is much more kind and considerate after being moved to the Dump, like when he gladly decided to help Frankie win back The Steelworks. He even works time to time with steam engines to stop Diesel’s plans.

Diesel 10 is blamed for the damage that Spencer did. 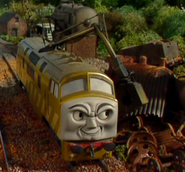 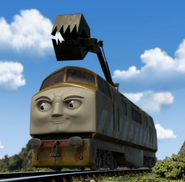