Thomas Made up Characters and Episodes Wiki
Register
Don't have an account?
Sign In
Advertisement
in: North Western Railway, The Motorized Railway, Diesels,
and 11 more

“Devious” Diesel is a BR Class 08 who works on the North Western Railway.

Diesel first arrived in 1957, and told lies about James, Henry, and Gordon causing Duck to be sent away. However, he was sent away due to telling lies about Henry. He did not return until Percy needed to go to the Works. At first, it seemed like he was ruder than ever. However, on his last day, he helped Thomas when Clarabel was derailed proving that perhaps that was a bit of good to him.

In Adventures on Rails, it seems that after his second visit, he is frequently seen at Vicarstown. It is believed that he is still owned by BR but allowed on the North Western Railway. He doesn't cause much trouble and instead seems more laid back. He does enjoying teasing the steam engines but he does work hard so the engines are all right with his presence.

Diesel is, in essence, the average pantomime villain. He is oily, malicious, devious, scheming, and full of ideas to get revenge. It appears Diesel has a good side in him, but one would still have to look deep to find it. He does want to be a really useful engine, however, since his arrival, he has given Diesels a bad reputation. He is also very proud to be the first Diesel on Sodor.

He is painted BR black all over, red bufferbeam, and silver side-rods. His side-rods were previously painted black. 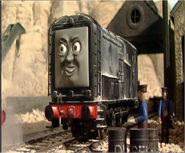 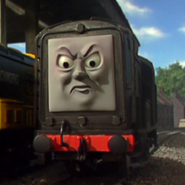 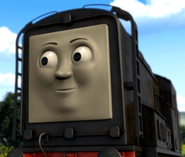 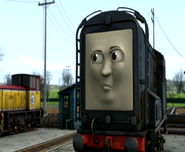