Thomas Made up Characters and Episodes Wiki
Register
Don't have an account?
Sign In
Advertisement
in: Characters, North Western Railway, Diesels,
and 4 more

Dennis is a lazy Diesel.

Dennis is a lazy diesel who tried to make Thomas do his jobs. However, after he landed in a ditch, he learned to be a Really Useful Engine.

In Adventures on Rails, he was sent to the North Western Railway for a short time to help out at Tidmouth after Duck was overworked. The Fat Controller considered buying him, but he had long met the cutter's torch by the time that happened. As a coincidence, he and Robert Means built Norman to help with the shunting at Tidmouth.

Dennis is a Bulleid Diesel.

Dennis is considered to be a very lazy Diesel who tries to take advantage of others and depend on them to do his work. Dennis will always create excuses to get out of work, but usually gets caught in his lies, and is always very sorry - until he finds another opportunity to get out of work again.

Dennis is painted light grey with dark grey wheels and roof and a red bufferbeam. 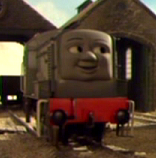