Thomas Made up Characters and Episodes Wiki
Register
Don't have an account?
Sign In
Advertisement
in: North Western Railway, Characters, Sodor Adventures,
and 5 more

Charlie is a purple saddle tank engine from the mainland.

When Charlie arrived from the mainland, he heard that Thomas was a fun engine and wanted Thomas to have fun with him, but Thomas was serious and was in no mood to play.

Charlie was later involved in trying to cheer Hiro up when he was feeling homesick.

Charlie began to act cheeky and teased Flynn because of his wabble. He was later involved in Sodor Surprise Day.

Charlie has a reputation for being a really fun engine. He has an unquenchable desire for fun, games and play, and is said to have been the favourite engine of the Mainland Controller. Charlie can get easily distracted by his japes, sometimes distracting others in the process. Charlie can be pouty, huffy, and teasing at times, but he always wants everyone to be enjoying themselves. Often though, Charlie will learn that the opinions of others, keeping calm and working hard to complete your jobs foremost, are important if you want to be a Really Useful engine. He has a good working relationship with Edward, often calling him "Eddie", who is sometimes capable of taking Charlie under his wing, and Thomas, who Charlie enjoys racing and sharing in the fun with. Being a fun-loving, playful scamp, cheeky Charlie is popular at parties and fairs, is well liked by the children, and known for his youthful humour.

In Sodor Adventures, he liked playing tricks when Bill and Ben showed him how, but after he caused an accident, he realized the errors of his ways and is now a bit more serious with his work.

Charlie is painted purple with gold and light purple trim and red wheels; he has the number fourteen painted in gold on his sides. 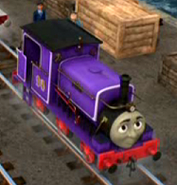 Charlie with Scruff and Stafford
Community content is available under CC-BY-SA unless otherwise noted.
Advertisement