Thomas Made up Characters and Episodes Wiki
Register
Don't have an account?
Sign In
Advertisement
in: Characters, North Western Railway, Adventures on Rails,
and 8 more

Bill and Ben are two tank engine twins who work for the Sodor China Clay Company.

Bill and Ben were first seen trying to find a "diseasel" that had stolen their trucks. They found BoCo with their trucks and pretended to be one until they almost made his eyes pop out! Edward soon put a stop to their games, and they have been firm friends ever since, though they still tease him sometimes.

Bill and Ben are based on the Bagnall 0-4-0STs "Alfred" and "Judy" of Par, Cornwall, who are both preserved and in working order at the Bodmin and Wenford Railway.

Bill and Ben both have brown nameplates with yellow writing, "SCC" written on both sides in yellow and "Brendam Bay" on the front of their saddle tanks. In the Railway Series, they have number plates reading 1 and 2 respectively above both the back of their cabs and their faces.

Bill in a Season 8 deleted scene 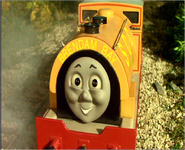 Bill and Ben with Marion and Timothy 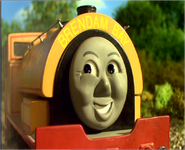