Thomas Made up Characters and Episodes Wiki
Register
Don't have an account?
Sign In
Advertisement
in: North Western Railway, Diesels, Characters,
and 11 more

'Arry and Bert are two BR Class 08 who work at the Ironworks.

In their first appearance, 'Arry and Bert crept alongside a lonely Stepney, who had mysteriously been sent to the smelters by mistake. They shunted Stepney into the larger smelting shed underneath a giant grabber, and threatened to scrap him. Thankfully, Stepney was saved by Sir Topham Hatt, once the diesels had left.

Despite being villainous, 'Arry and Bert are also known for playing tricks on steam engines, such as making them "middle engines". Once, they shunted trucks in front and behind Percy. This later led Percy to being pushed onto the coal tipper by mistake. Later, 'Arry and Bert played the same trick on James. Sometime later, they frightened Fergus away from the smelters, and bullied Neville, which made the engines think he was planning to bump them.

On some occasions, 'Arry and Bert's teasing ways backfire. Once, they played a ghostly prank on Thomas and Emily during Halloween, though they ran away when they thought Emily was a ghost. Another time, Harry and Bert teased Percy for having a whistle. Percy paid them back by creeping up behind them and blowing on his whistle. Later, along with Diesel, 'Arry and Bert began teasing Thomas for being smelly, but were later covered in stinky cheese.

'Arry and Bert were also part of the group of diesels that took over the Sodor Steamworks. They later teased Henry because of the coal he had to use by calling him "Mr. Special Steam". They also laughed at Gordon after he ran into Diesel's flatbed and damaged his bufferbeam.

When Sir Topham Hatt was seeking work enforcement, he called in 'Arry and Bert to assist. They helped Diesel come back to Sodor to apologize to the engines. After that, they worked hard on the restoration of the Kirk Ronan Branch Line and temporarily ran until Russell and are usually at the Ironworks, usually melting down scrap iron to make new metal or parts that can be used for many purposes.

They are painted NWR green-grey with yellow hazard stripes on the front and back of the cab, yellow cab and the Bristish Railways "cycling lion" logo on either side.

'Arry and Bert are painted green-grey with yellow hazard stripes on their fronts and rears and yellow cabs. They have "Sodor Ironworks" written on their sides in white.

In the Gender Bent Universe, their counterparts are Ari “Arianna” and Berry.

Harry with his twin 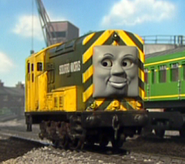 'Arry and Bert with Mavis 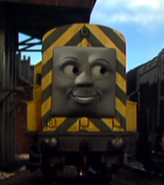 'Arry and Bert with Mavis
Community content is available under CC-BY-SA unless otherwise noted.
Advertisement